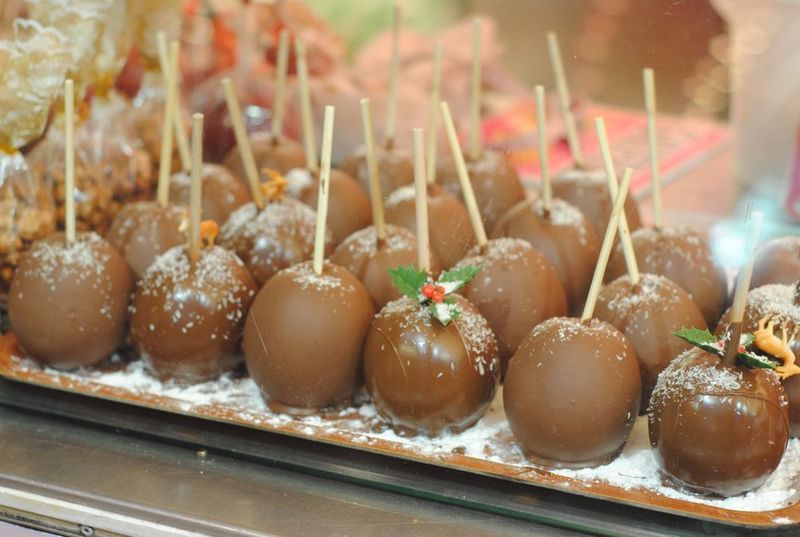 There was this young lady at the supermarket, in the chocolate section. She was with her daughter, four or five years old I’d say. When I was looking for the object of my latest addiction – Nestle almond and nougatine milk chocolate, I DIE[1]-, she went for two slabs of dark Cote D’Or. While lusting conspicuously for the milk ones, taking one and then putting it back.

“Mom, I don’t like dark chocolate, why do you always buy dark chocolate?” pointed out the little girl. “Because that’s what we must eat”, her mother replied, without any hesitation. And there she was listing all the health arguments, on why dark chocolate “builds muscles”, “gives a nice silhouette” (you could feel she wanted to avoid saying the F word, whatever you do don’t say milk chocolate makes you fat, but do everything to explain it anyways).

Simply put, she looked like me three years ago.

The mother torn between her own tastes which obviously fall on other types of treats than the ones she put in her trolley and her number one preoccupation: not be the mum of a fat little girl.

Who, by the way, didn’t show any obesity forerunners.

I bit my tongue not to intervene (not only don’t I want to become one of those embarrassing women who speak to everyone in the supermarket but it happens that I would surely take badly that an stranger – even an influential blogger – comes and lectures me on how to feed my children). I managed, thus, not to put my two cents in this conversation which lasted between this mum who was trying to convince her daughter “that by eating some you’ll end up liking dark chocolate” and a kid ending up saying with a sob that she didn’t like any of the snacks her mum was preparing for her “because there’s only dull things in them”. As a matter of fact, the rest of the trolley was overflowing with all those organic biscuits with bran and stewed fruits with no added sugar which, if they don’t taste great, have the merit of reassuring parents: they won’t be reproached for having stuffed their offspring.

If I hadn’t suppressed myself, I would have told this young woman that milk, white and dark chocolate have exactly the same energy content. That no one has demonstrated that dark chocolate “build muscles” while milk chocolate gives cellulite. That you’re certainly better of having two pieces of a chocolate you enjoy than five of one you eat with no pleasure. That when you think about it, it’s strange to end up saying you “must eat” chocolate, even dark.

That there are good chances that her daughter, frustrated by this interdiction, begs, during snack time, Kinder Pingui or other very dangerous for muscles junk food and appreciates them all the more as, at home, all Ferrero products are considered hard drug by-product.

Don’t be mistaken, there no judgment from my side on this story, I don’t have the key of what mothers should to do to educate their children and even less of this precise subject of food. I’m not saying either that people who eat dark chocolate are Nutella frustrated. Personally I prefer milk chocolate but my oldest daughter swears only by 70% cocoa. But while I find nice to allow children to taste a bit of everything, I’m convinced that deciding of their behalf what is good for them – even if they find it disgusting – will not encourage them to like it.

No one wants to have children who are ‘too’ fat. But it could be useful sometimes to ask yourself why you want them to be slim. Other than to fix a narcissistic wound, whatever it is (it’s not only women who are or were curvy who fear that their children are too big, the narcissistic wound can be physical but not only). I try, every day, to fight this temptation of make my children an extension of myself. Not to make them carry the weight of my failures in any domain and to make them understand that whatever their future waistline, I’ll love them all the same.

You know what? I don’t succeed every day.

« A healthy mind in a healthy body?
Have you lost weight? »