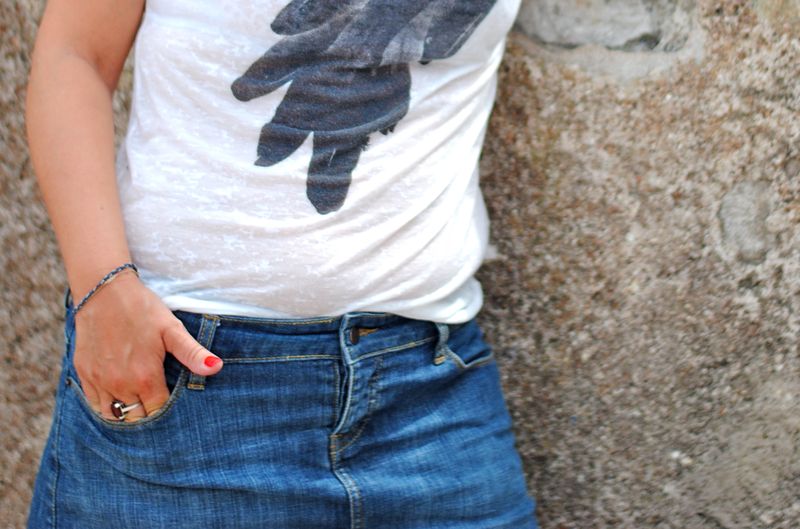 In a recent, particularly tearful and full of self-pity, article, I was listing my end of holidays sorrows. I had especially confided my slight anxiety of having brought the ‘letting-go’ to its climax and having thus tested its limits. In simpler terms, I was dreading the scale moment, convinced I had gain everywhere a bit, even a lot.

Thus, some of you interrogated me in the comments about this, the difficulty of distinguishing between the letting-go recommended by Zermati and the holiday barbecue big mess.

I don’t have all the answers, but I can nevertheless tell you about the way I handle, since three years now, the periods when I’m not in my daily rythm. With, as a preamble, this clarification: I actually didn’t gain one gram during my holidays, I guess this impression of being swollen was 50% psychological and 50% hormonal. Or the other way round.

In short, during holidays or week-end with friends for example, I try to remember the exchanges I had with doctor Zermati. Who advised to, first of all, trust myself. You wouldn’t think but when you’ve been completely robbed of your instinct and common sense by years of stupid diets, trusting yourself is in itself a huge challenge.

Trust, thus, your hunger, your satiety sensation but mainly in this case REGULATION. The natural mechanism that will do so that, after two or three copious meals, exceeding by far the famous satiety threshold, the body will spontaneously want to go easy. For this purpose, guilt and anxiety of putting on weight must be banned and it’s certainly the most difficult, conditioned that we are to regret the smallest deviation.

Even though deviations, as mister Z often repeated, are somehow proofs of your balance. No one can keep, day after day, the same way of eating perfect quantities in due time. And even, those who manage to do so are maybe even more neurotic than the Pringles compulsive like us (like me at least).

In short, buoyed by this advice, I’ve made a point to keep them in mind and I’ve deprived myself of nothing during the holidays (that said, neither do I deprive myself during the rest of the year). That doesn’t mean I stuffed myself either. But I’ve eaten cherry cake every two days, chestnut/chocolate cake or pizzas to die for from our fetish restaurant. The rest of the time, it was homemade ratatouille (around 234 ratatouilles have been cooked during these holidays, my children are about, I think, to murder me with a courgette if I cook some more before June next year), tabbouleh or tomatoes salad.

At the end, thus, my weight is identical (less 500 grams actually).

I deduct from this that it’s possible, it’s not a scoop but I think it has been the first summer when I’ve really switched on the “instinct” mode, without restriction or almost (it’s a long way, right…)

I also notice that during these holidays, even more than during the previous ones and in general during the rest of the year too, except for children’s snacks, I’ve bought only few ‘readymade products’. I indeed opt for, and this with no effort, raw food which I cook, even in a very basic way. I mean that I never buy anymore readymade toasted sandwiches, frozen lasagnas, vacuum packed cottage pies or yogurts like Danette or La laitière (these are yogurt in name only).

My mother noticed that, even on holidays, I was baking lot of cakes. That is true, outside of holidays time too, I love baking, it’s my thing when I’m out of ideas or you name it, cooking clears my mind. But, I told her, the children almost don’t eat industrial cakes or pseudo dairy produces packed with sugar and fat anymore. At the end, I believe it’s for the best.

Don’t worry, I’m not becoming an organic fundamentalist or a fierce locavore. But I think it‘s part of a global process, trusting yourself is about listening to your desires and your body rarely request a Savanne or Twix, especially if it knows it can have much better instead.

Here is the fruit of my reflection, I’d add a damper to all this: I still eat industrial, milk chocolate and I could kill the one who finishes my slab of Nestle almond/nougatine.

Edit: I believe it’s one of the biggest misunderstandings about ‘zermatism’, some translate a bit too quickly “trust yourself” and “eat your fill” by “if you eat with pleasure, it doesn’t make you gain”. That is obviously wrong. The notion of pleasure is important. But when you eat compulsively, there’s pleasure but it makes you gain. In short, Zermati never advises to stuff yourself, let’s be clear!

Edit: The picture it’s because initially I wanted to write an article about my denim skirt, my summer basic, worn in every situation and again this morning. And then when looking at it closely, I told myself it was taken on the day I felt it was too tight and that indeed it shows a bit. And a thought leading to the other… Who knows, maybe tomorrow…

« When Zermati et Apfeldorfer settle old scores with Dukan
A healthy mind in a healthy body? »