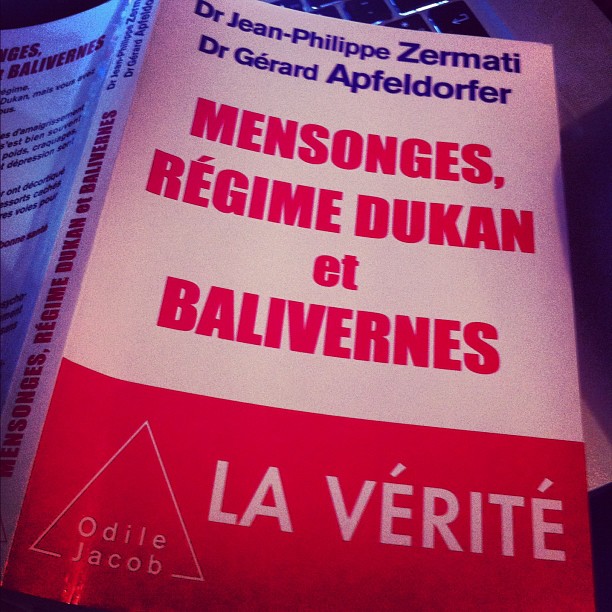 No doubt you didn’t miss it but doctors Zermati and Apfeldorfer finally settle old scores with Dukan. Not on a ring, no, but in a small book “Mensonges, régime Dukan et balivernes”[1], which I’ve personally found exhilarating, as it manages to expose the ridiculous – and nevertheless terrifying – aspect of the protein diet pope’s views.

Exhilarating also from the sharp style and some turns of phrase that, I have to admit, made me snigger (I’m a budding sniggerer, it must be said, the one who was systematically caught during class for giggling at jokes from funnier than me). Authors should take the credit for it, but Dukan too, whose words, quoted and dissected in the essay are themselves a huge joke. In which we learn that for example one solution to extra kilos but more globally to ill being lies in taking “for life” what “simply is a treat”: the much vaunted three table spoons of oat bran. Obransly!

In which we discover too that Dukan advises beauty industry to “take part in developing the awareness around overweight’s devastating role in the beauty equation, in the thickening of facial features, in eyes expression, etc.” , that he plans to create a “mac-du”, “big mac double” with …bran patties inside, what else… without mentioning “his future international cooking school to fight excess weight”, or a “French anti-overweight cooking Academy”. Bran it on, once again…

I could talk about it in length as some part also moved me – the book is funny through its irony but doesn’t forget to be serious nevertheless – when I’m now familiarized with the two authors’ theories.

Moved me because it appears rather quickly that, beyond Dukan’s cosmic and imperialist delirium, his method is based on stigmatization of people he calls himself “fat”. I hadn’t read his writings and I guessed he often crossed the red line, I didn’t think he played that cruelly with the essence of a fat person: his or her low self-esteem. In their work, Jean-Philippe Zermati and Gérard Apfeldorfer apply themselves to demonstrating this but also to rehabilitating the honor of overweight people.

I could talk about it in length but I’ve preferred asking doctor Zermati to answer a few questions, so, after this long preamble, here are his answers.

The number of patients completely destroyed by Dukan’s method we see every day with Gérard Apfeldorfer made us react.  We are not talking anymore today about an epiphenomenon, but about millions of followers, as he states himself. All these castaways have devastated us, we couldn’t keep quiet.

Exactly. Actually, I had never read his writings. I knew his method, I had heard him on TV, but had never immersed myself in his books. And there, what we discovered stupefied us. More than his precepts to slim down, it’s his philosophy that is terrifying. Not only does that man want to get rid of our fat, he wants in all modesty to save France, and then conquer the whole planet. On the premise that “fat people” are so because they react to their emotions with food – an observation that we share – what does he suggest? Nothing less than eradicating misfortune. As crazy as it gets, a dream for a smooth and purified society, with no emotions and occupied by beautiful and happy people because they are slim. A philosophy that bring to mind one of a guru, even the darkest hours of history…

The real danger lies in long terms destruction of eating sensations with, at the end, difficulties to treat eating disorders. Above all, with his permanent stigmatization of overweight people, whom he describes as “dehumanized”, Dukan ends up wiping out all their self-esteem. He has understood very well that the main anxiety of his patients is to be rejected. He plays with this feeling of exclusion by promising to make them more beautiful and thus more loveable. And during a first phase, he indeed makes them slim down. While warning them that if they don’t follow his principles literally, they’ll gain again.

Of course! It’s the funding principles of his theory and of diets in general. The patient has slimmed down? It’s thanks to the practitioner. He puts on weight again? It’s because he is a loser with no willpower. It’s magical and wonderful because it works every time.

I believe there’s currently a realization from health practitioners that diets are inefficient. The ANSES report published in 2010 denouncing the iniquity of diets has been a real trigger, even if it wasn’t a revelation for us who’ve been working for 15 years on alternative methods. But there again, there are misunderstandings. Many wanted to see in this report a comparison between good and bad diets. Yet what this report wants to question, it’s the actual concept of diets. Admittedly, we are able to differentiate Dukan’s purification delirium from the lighter Weight Watcher method for example, but it’s wrong to think that Weight Watcher is not a diet.

We sketch in our work a few trails that are the funding principles of our method: self-listening, respect of eating sensations and work on emotions. There are solutions. But they imply that you accept this initial postulate: everybody has a set point and this set point can’t be changed.  The objective of our therapy is to somehow get back to this set point, not to display a spectacular weight loss, even if this happens sometimes, when the patient is just way higher than his or her set point.

Edit: doctors Zermati and Apfeldorfer have put online a petition against diets. Feel free to sign it if you agree with this position. You can also leave your feedback on the site. Besides, you can find the two practitioners on Linecoaching. Very interesting articles are published there, starting with this one (it’s also a portal with paying online therapy).