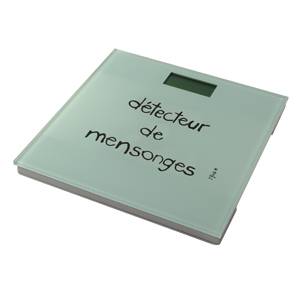 Thus, that’s it, the four experimental days are over. Don’t worry my dear slim reader, I promise, as soon as tomorrow fashion, beauty or even maybe sex will be back on. But for now, I want to focus on this adventure I’m going through with my new friend:

Hunger.
We met on a beautiful morning in September. We recognized each other and stuck together for the past three days, so moved we were from these new sensations.

Because yes, I have to say, it was a bit new for me to wait until I’m on the verge of fainting to eat. So, just like Gerard Jugnot going down a slope with one ski to understand the point of having two (1) , I indeed well understood that hunger and desire to eat are two totally different sensations.

Wait, of course, I know what it’s like to be starving.

Except that I’m the kind who shouts from the rooftop that I’m about to faint as soon as I feel the first gurgle.
But then, the instruction was to try to wait.

My conclusions, here they are, higgledy-piggledy. Let me however point out that I’m not turning into an online nutritionist. What’s relevant for me at a particular moment is not necessarily relevant to others with a different past, a specific story. I’m not doing proselytism and not pretending Zermati’s method is the right one or the only valuable one. I simply want to believe in it a little as it’s my last chance, everything else had been tested and not approved.

In short, thus, after four days without eating breakfast or postponing it to the maximum, here is what I have in mind:
• First morning is the most difficult
• The tea I usually drink without really paying attention became a fountain of youth nectar.
• Public transport trips on an empty stomach don’t turn out well with me.
• It’s easier not to have breakfast at home during week-end than at work, since you can lie down until unease disappears. And, you get up later, it’s something.
• Eating potato bake at 4.30 PM makes you look like a bulimic, for sure, everybody is visibly not aware that food diktats must be kicked and you should listen to your body as a friend.
• For family life, it’s complicated to zermate.
• It’s true that little by little you adjust your pace with your family’s, yesterday I ate and I was hungry at the same time as everyone else. Just like babies, actually, who end up eating four times a day. It can take time, read my lips… but it’s another story.
• I’ve lost 3 kilos, almost 4 since I’ve started to see Zermati (more or less three weeks), 1 of them was during those four days. While eating croissants, cured ham, chocolate cake or bo-bun. But only with the real munchies and with relatively reasonable quantities, satiety and I became like sisters.
• Knowing that you can eat what you want drives you to choose healthier food. It’s weird but it’s like that, what is not forbidden seems to lose its appeal.
• When you are very very hungry, indeed satiety is easier to identify. If only because gurgles and cramps stop after around ten minutes.
• Being hungry is at the same time very unpleasant and great, especially if you start visualizing your cellulite being kicked.
• I don’t know if it’s true that a croissant eaten at 11h30 when you’re on the verge of starvation is immediately destroyed and consumed by our body lacking energy but the fact is you can feel it is easier to digest. I’m prone to heartburn and I didn’t get any during those four days.
• Taking, as a first snack in your day, an aperitif “wine/ pata negra” at 13h30 is not super recommended for human dignity and drink holding. When on top of that, it happens with very honorable people you barely know, namely your son’s friend’s parents, you can expose yourself to meaningful looks on the way to school the next day.

That’s it, from now on, I will go back to my normal activity, or maybe not. I’m wondering if I’m not going to stick to not having breakfast when I’m not hungry. Let’s see…

(1)TN: this is a reference to a scene of a French comedy called ‘Les Bronzes font du ski’ 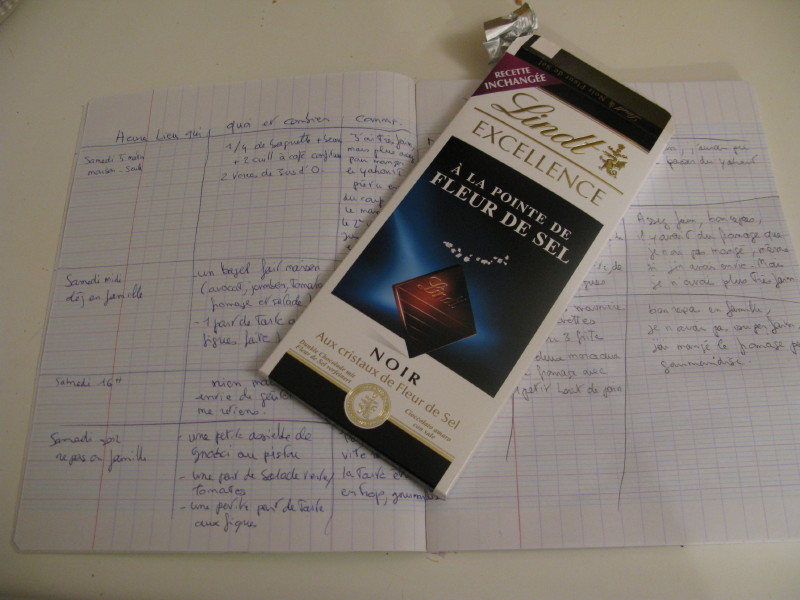 So, what about my zermating? Believe me, believe not, since last week’s consultation, I’ve lost two kilos. Rest assured, I am not jumping all over the place screaming out of joy, I know myself enough to know that I usually celebrate with a piece of  custard tart and, bam, the two kilos are back.

Nevertheless, I haven’t seen the needle tilting that way for months. So I deduce that maybe something has started out.

It must be said that keeping a food diary is a lethal weapon against snacking. Of course, it is always possible lie through your teeth. But in that case, it’s really going to be an expensive consultation if I pretend to feed solely on greens and grilled meat, at regular hours and with reasonable portions.

As a result, inevitably, to the ‘Touch of sea salt’ chocolate slab that eyes me up not even one hour after a rather copious meal (a to die for bagel loaded with cream cheese and avo + a slice of homemade figs tart), I say get lost. Basically, let’s say that chocolate cravings are like cigarette ones, they goes away. Or not.

Right, even if I feel like a bomb shell since my weight went down to a new set of tens (yes, those two kilos are all the more symbolic for that reason) nothing is sorted out, because it is not normal to have my eye on chocolate at 14h right after taking the edge of my hunger. I have a feeling the journey to eating serenity will be a long and bumpy ride.

That’s it, otherwise today I am actually going back to work after our summer holidays and I feel full of enthusiasm, sort of… A true warrior who will go a long way in life.