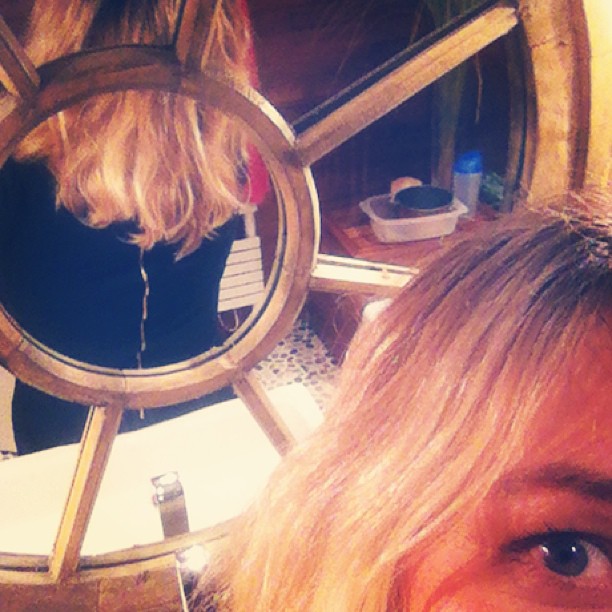 So yesterday, I was singing snow’s praise.

That’s all in the past.

Now I give it shit, which is alas only a way of speaking (you’ll understand the joke at the end).

What’s the reason behind this sudden turnaround? Because in the unequal fight that happened yesterday between my backside and the snowed stairs of my building, the final score was:

I literally did bust my ass. Or more precisely the 4th sacral vertebra (right above the coccyx in fact). Not only did it break but it moved as well. It should considerably postpone my recovery, which is estimated to 3 months, best case scenario.

This past Monday was indeed a very nice day. After that memorable fall on the way to school with Rose, I first thought it would go away. “It”? The feeling of having been put on a spit, no more no less. So I somehow dropped Rose off in her classroom and went back home walking like I dried on a horse.

I hadn’t cried with pain since my childbirth but I made up for lost time.

After calling my brother for help, he for once didn’t advise me to see a shrink and I went for an X-ray of my buttocks together with my twins, of whom most teachers are off sick, which for once seemed fairly good news, since going out on my own was simply not doable.

I didn’t have much doubts as for the results, I felt on my bum often enough to be able to identify in my pain something else than a good old bruise.

My feeling was soon enough confirmed by the receptionist, who cried out after seeing the x-ray «Oh gosh, she didn’t botch, it’s properly broken»

« With all this snow you see loads of kids with broken wrist, don’t you? », I say to distract attention from my broken ass displayed on the wall. “No, mainly elderly actually», she replied, with a knowing look. This reply made my son die laughing, he was moreover totally excited to be able to see a real life fracture especially in an uncommon place.”

My daughter, trying to comfort me, hastened to tell that I’ll get well soon and that there must be a solution to fix me. “Not so sure, you know after a certain age, bones take time to heal” he corrected her immediately (he will not go to England this summer as planned, he can dream on). “You’ll want to eat yogurt mum” he went on in front of the receptionist in high spirits.

We went back home,so-so, with only one advice from the radiologist : buy a rubber ring. I thought I had been spared from this kind of festivities thanks to c-section. Apparently God had other plans for me.

And not only a rubber ring a priori.

Because, when he came back from work, The Churros decided I couldn’t stay like this without seeing a doctor. Here he is, calling emergency medical services. They choke when they learn I’ve been walking around since this morning with a vertebra out gallivanting and sent me directly to the closest ER.

I will avoid detailing the joyful atmosphere of that big hospital in this season.

After three excruciating hours on a plastic chair, cursing my dear husband for not letting me dying on my couch, I’ve been finally seen by a dark-haired doctor. Aka the orthopedic specialist who, what a surprise, was not twelve.

First, Dr Torres’ male twin basically explained to me that there is nothing much to do. But he corrected himself right away and wanted to check that the vertebra displacement didn’t cause any neurological damages.

Even with my medical education – eleven seasons of ER, nine of Grey’s Anatomy and the complete series of Dr. House, I can diagnose a lupus with my eyes closed – I didn’t see it coming.

I understood the meaning of this acronym when he walked the talk, lifting his little finger in a manner that didn’t call into question as per where the said finger was planning to take a stroll immediately. Good news was he lifted his little finger could have been the middle one (2013 is the positive thinking year).

Initially I laughed, thinking that the guy, feeling we had affinities, was cracking a joke.

I will not leave any suspense, he was not joking.

On the bright side, a priori, I am not suffering from collateral effects of this kind of accident.

Bad news is I am going to enjoy two weeks of laxative, on the grounds that, it’s not going to be a piece of cake on that side. No kidding!

Well and if, on the contrary, I start to experience the slightest incontinence, do not hesitate to come back immediately.

Or how to become bedridden within one day.

Honestly, I did love this 21st of January.

Here you go, I’m leaving now. This note has been written in a position decency forces me not to describe. Not sure I’ll come here often in the next few days, my ass is kind of wrecked right now.

“Spring is coming, girls will dress lighter and skirts will get shorter”, two of my friends were saying gladly recently. Yes, spring is coming. And this news is far from making the curvy girl happy…

With nicer days, you will have to say good bye to big pull-over and coats which indeed don’t hide anything but are so many shields between your body and inquisitive looks. Good bye as well, close-fitting boots which enhance your calves’ shape.

Summer also brings its lot of annoyances. Summer shoes straps dig into swollen feet. The curvy girl is out of breath quicker. She sweats more than average and suffers from headaches right from the first heats.

But mainly, summer means for the curvy girl the appearance of the painful and shameful ‘rubbing thighs’ syndrome. This affliction which can make you smile at first is a result, as its name states, of the extra fat on the top of the thighs. They rub against each other for each taken steps. With heat, legs tend to swell which just accentuate the phenomenon. Initially, the sensation is barely annoying. But in case of a long walk, skins get hot and thighs keep on hurting each others. Just like sandpaper against an open wound. At the end of the day, your groin is bleeding and the burn unbearable. Though, the curvy girl would rather die than talk about this bruise.

Summer is coming and boys are glad. They are far from guessing the suffering hidden under curvy girls’ skirt…

There are phases during which it is impossible for me to enter. Even looking through the shop front is painful. And then there are auspicious days, when the needle hesitates and indicates a number lower than the maximum weight. Then I sometimes take the risk to go for it and cross the threshold. I manage to go behind somebody else, hoping She will not see me. She, the sales assistant. Feared, envied, often hated. She is in turns despising, condescending, almost offensive sometimes. Hardly ever kind. Yet I am only asking for that. A smile, even a sorry smile, would be enough. She is often taller than 1m70 and never prayed for the needle to stay below that damn number. She walks around just like a cat on its territory, gauging customers, choosing the one she’ll dub, with who she will be all sweet and flatterer. With her, the curvy ones, fat or chubby, have no chance. They can hope for disregard or fear her final judgment “Sorry, we do not have your size”. The description is short. But here it is, according to me, there are only two parts in feminine world: the fat ones and the others. Well, from time to time, I am more subtle. But never when I have entered the Holy of Holies, the clothes shop.
Inside, I have a look at the garments. Well, not really. The sizes. 42, 44, sometimes 46. If I am alone, if she is not looking at me, and if I am in the mood then I select 2 or 3 pieces and slip off to the fitting room. The will to be invisible is stronger. But when one is fat, one is not invisible. Eagerness makes me clumsy. While weaving in and out of the aisles, I hit one or two hangers and clothes fall loudly on the floor. That is when she steps in, tight-lipped, pointedly worried for the trousers I am about try on.
– May I help you? – No, thanks, just browsing, hum… I am going to try one or two things on. – I see. Feel free to ask me, should it be the wrong size. – Yes, OK, thank you, I… I…
The ball is rolling. I forget that I am older than thirty years old and that I have done nothing wrong. I turn into a poor stuttering little girl, upset and ashamed for daring coming in. I am ten, maybe less, and I am back with my mother in another shop, with the same fears. Often, at that particular moment, I decide to buy these slacks or anything else without even trying it on, only to get out of there. During payment, I look out for gratefulness. But she is not. Until the end, I am an intruder. She knows I will not wear it and I think I can hear her laughing with her colleagues.
Sometimes, when I buckle down a bit, I enter the fitting room, pray to find a mirror in there. Otherwise, it means going out, being exposed to her look and those of rightful customer, the thin ones. I undress and start feeling the first signs of distress. Here, all is whiter and bigger. The worse fitting rooms are covered with mirrors. One can check she is fat from every angle, front and back. And sideways.
I start to slip the trousers on. If I can button up, usually, I will not even try to find out if they fit me. I get dressed again and I buy them. I can always wonder if they are nice later. And anyway, are size 44 trousers really made to be nice?
But most the times, they start to get stuck around the knees. Each second, each inch further is then a lost battle against fat. I know it is indecent to suffer from that. The pain however is real.
When I was little, in the fitting rooms, my mother always pulled the curtain before I was done getting dressed. Everybody could then gaze at the plump and bright red me, skirt lowered, shirt too tight – “We don’t have anything bigger”, the sale assistant was shouting to my mother, whose embarrassment and shame were so obvious to me. Thank God, she does not come along anymore today but I am still as bright red in my fitting room. And tears run silently, when I must recognize that at least 10 cm are missing for the button to get to the hole. Then I leave as fast as I came in, holding back my sorrow. There are two worlds, one for fat girls and one for thin girls. It is indecent, shallow and unworthy of a not really stupid girl to be that convinced. But it really is my personal conviction, since I am old enough to see my reflection in the mirror.