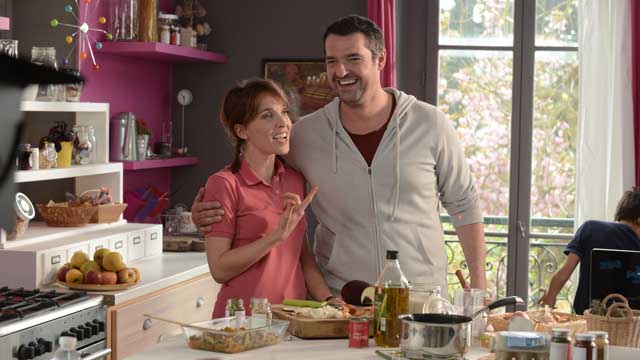 Yesterday evening was the first screening of ‘Parents mode d’emploi [1]’, for team members and a few guests. I managed to invite a few bloggers and, of course, el Churros was there to cheer me up. A nice evening, despite a few – rare?- embarrassing moments. Wanna hear?

15h01: Tonight is the big night, tonight is MY night, finally the whole world will discover that I’m the new Agnès Jaoui [2].

15h02: I’m wondering what Agnès Jaoui would wear for such an occasion.

15h03: Agnès Jaoui, I don’t know about her, but I’ve kept aside for two weeks this new dress which is romantic scriptwriter like.

15h04: A bloated scriptwriter though.

15h04: For the trouble taken, I’ll buy a little something from Asos, I’ve been wanting to try girdle from Spanx for ages, hopefully when they’ll see my contact details they’ll send a messenger.

15h07: My fame as a scriptwriter hasn’t visibly reached them, I’ll receive my girdle only in three working days. It’ll be very useful on my couch. No way I’ll mention them in the interview Grazia will soon make of me.

15h09: Agnès Jaoui has never used her appearance as a major argument, I’m above all this. My tummy is above this too. Exactly ten centimeters above my panties.

15h10: I try to remember what I liked in this dress when I bought it, but right now in front of the mirror, nothing comes.

15h45: I send an email to the bloggers I’ve invited to warn them I’m bloated, so no stolen pictures please.

15h54: What if Judd Appatow calls me after the screening?

16h07: Let’s make things clear, I’m willing to go to the US to help Modern Family’s team find inspiration back. But they’ll have to pay. French school in LA costs a hell of a lot.

17h04: I’m wondering how the Churros will live through my fame.

17h08: I mustn’t forget to thank him first at the Emmy awards. He is my rock.

18h12: It’s not that I’m scared. Just that I feel like going for a mammography. Or a smear test.

19h14: The Churros is back from work, pizza for the kids is in the oven – they might as well get used to it, their life will change, having a mum in the cinema business, it’s like signing up for obesity – we can go now.

19h15: I ask the Churros if my dress makes my ass looks big.

19h19: Like it’s the right time for the Churros to think he is Anna Wintour.

19h20: He can go whistle for my thanking him during the Emmy.

19h22: I understand now why Chouchou and Loulou[3] haven’t survived the Oscars. It’s the price to pay.

19h23: If it’s the price to pay to play in George Clooney’s next movie, I’m not sure Anna Wintour will stay in my league for long.

19h28: The Churros is facing a dilemma. He’s asking himself if he should eat before leaving or rather save his appetite for cocktail.

19h30: I warn the Churros if he touches the kids’ pizza, he will really get the idea of my anger.

19h55: We get out of the metro, the Churros asks me if we have time to grab a bite before we go.

19h57: Poor thing, I believe he is simply in denial, he doesn’t want to see that I’m no more no less than taking off. I’m wondering if I should organize a balloon release tomorrow. I think he needs to materialize my success and my emancipation. I remember in one of Desperate Housewives episodes, one of the girl did this to take in her miscarriage. Oh boy I cried. Maybe I’ve been touched by the writing grace at that particular moment?

20h00: everybody is waiting in front of the cinema, my blogger friends are there, I see pride in their look. I think I’ll invite them too for the balloon release.

20h10: We’re sitting in the chairs, the series’ team comes on stage. I’m a bit surprised, I’m not asked to join, of course we are about fifteen scriptwriter, but I believe we all agree there are “scriptwriters” and scriptwriter.

20h16: The Churros asks everybody around him if they have already eaten.

20h18: It’s about to start, my stomach is tied in knots like never, what if no one laugh? What if only the sketches I’ve written don’t make people laugh? What if…

20h23: Here we go, my fear disappears into thin air, laughs are everywhere.

20h25: Between Arnaud Ducret and Alix Poisson, something precious is happening, it’s called alchemy I think.

20h40: When I said Greta Garbo, I was actually thinking of the period when she was still acting not the one when she was gathering dust in an apartment with closed windows, huh.

20h45: Ok, it’s all fun and games but if I want the States to come looking for me, Caroline’s touch will have to be turned on at one point or the other. I understand they don’t want to frustrate others, but even the bests sometimes need to be on center stage.

20h46: The Churros asks me if the interval is coming soon, he is hungry.

20h50: I don’t want to jump to conclusions but I clearly heard more laughs than during all other scenes.

20h52: My heart’s rate is hitting 200 since I’ve heard my word acted on screen. I feel like I’m 14 again, guitar recital, alone on stage, my teacher behind the curtain, all these parents looking at me and then, painful blank, I’m unable to play a note. And suddenly, music rise anyway, when I understand it’s my teacher playing on my behalf behind the curtain, I pretend to be plucking the strings. I’ve just invented air guitar. And put a stop to a promising musician career.

20h54: Laughs go on, I think the team’s bet is a success. Actually the balloon release is right there, and the ones we’re letting take off are Isa and Gaby, and Laetitia too, Paul and Jules. These characters we have shaped little by little in our mini sketches have come to life, quite simply. They exist outside of us, almost, and it’s altogether terribly moving, slightly harrowing and totally exciting.

20h57: Last sketch and lights are back on already.

21h00: « Hey, in fact, there was only one you’ve written, wasn’t there? » shouts the Churros (who hasn’t yet unfortunately died from malnutrition)

21h02: He doesn’t know it yet but he will watch Emmy Awards from Kremlin Bicetre.

21h03: Let’s hope no one asks which scenes were written by me.

21h04: “It was super, but which were scenes were written by you?” my blogger friends ask me.

21h05: Let me just keep it vague and say there are too many to list them.

21h06: Or maybe I should insist on the team dimension of the writing process.

21h09: With my luck, the girl next to me is precisely the author of the funniest scenes. And accessorily Angelina Jolie’s future best friend. I don’t know her but I can’t stand this bitch who will have it off with Georges on MY behalf.

21h10: when I’m about to find a vague answer to my blogger friends’ question, the Churros ends my suffering “There was only one, too bad huh! Right, let go eat?”

21h12: To comfort me, the Churros, who always finds the right words, reassures me: “No, it’s not about your texts being crap, it’s just that right now they wanted to show the funniest ones, you see?” Yeah I understand the idea, as Anna Wintour would say.

21h15: The Churros has preempted a buffet table and eats up conscientiously a charcuterie platter.

21h45: It’s a bit cold, it feel like winter in front of the Parisian cinema. I realize that I’ve just attended the screening of a series in which I’ve participated. That I might not go to the Emmy right away, that I don’t really look like Agnès Jaoui and that indeed there was only one (or two?) sketches I’ve written in this screening. The truth is I’m in that boat and I wouldn’t give my place for nothing in the world.

21h48: On our way back, the Churros whispered in my ear “Did you see your name in the credits ? Because I did.”

Edit: More seriously, this short program will be broadcasted soon on France 2 [4] just before the evening news (the date is not totally confirmed yet, but it could be after the autumn break) and I’m only one of the authors of this series directed by Béatrice Fournera and Paloma Martin y Prada. Thank you to both of them for their trust. I hope you’ll like them when you’ll see them, as soon as I have teasers I’ll show you. And for real, I promise, I’ve written many! (Did I mention the team dimension of the writing process?)

[2] TN: French actress who has written and acted in several comedies