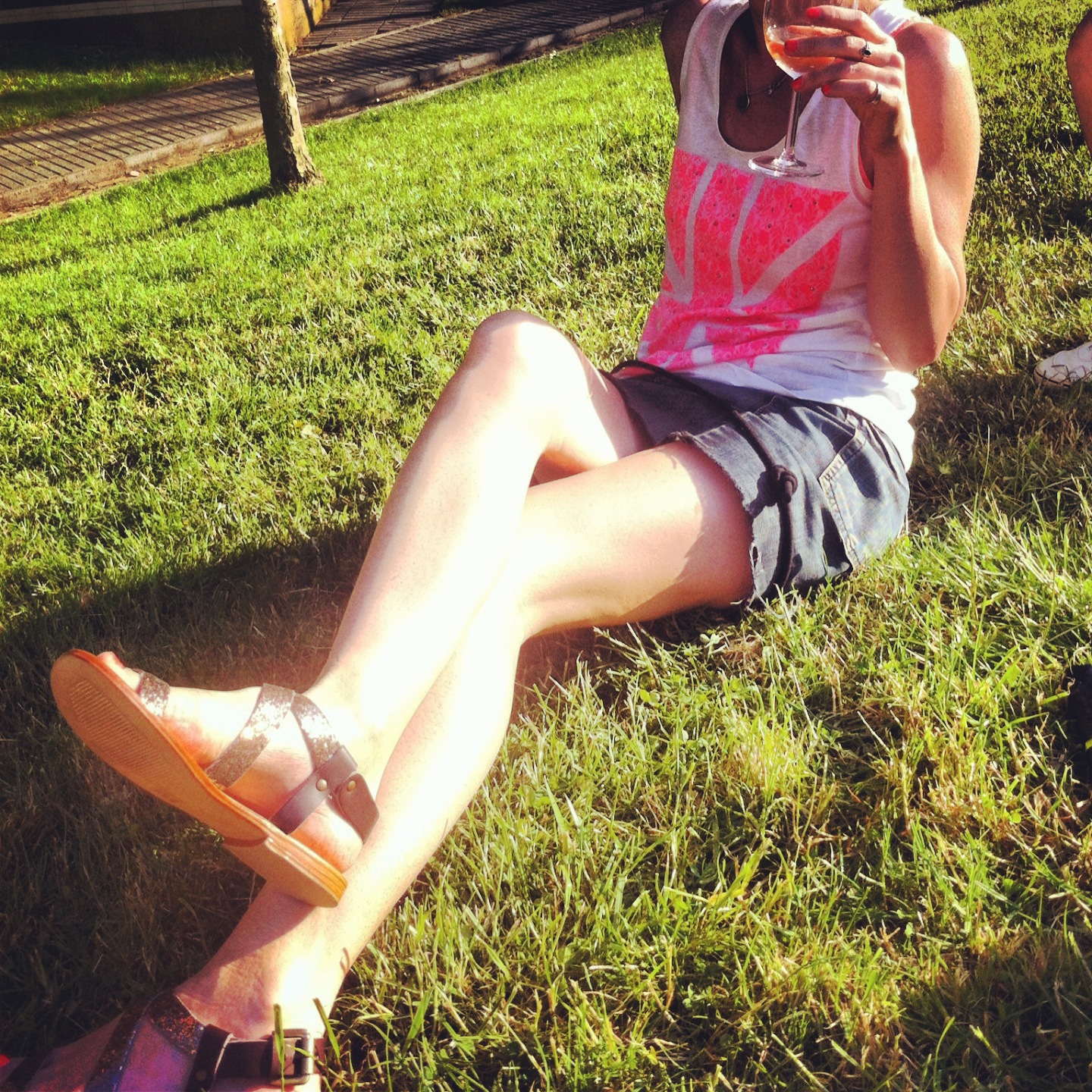 During our holidays in the mountains, we played “beret”. It’s a sort of dodge ball but without ball and without dodge. No one knows that game except for former scouts actually.  I have to admit that explaining the rules is exhausting only by the thought of it but basically at one point you have to RUN. Usually, I am clever enough to be “busy” during those parental joy and group emulation moments. But that day, I don’t know, a blank, an invisible stroke or planets misalignment, I heard myself yelling: “wait for me, I’m playing too”

As a result, the best members of the group made up my team but we lost and not only did I humiliate myself trying to catch up with a six years old girl but I also fell flat like a shit while trying (no other less rude comparison comes to my mind right now). I don’t know what was the most degrading, falling heavily after running two meters or my panicked kids’ attentiveness, they treated me for the two following days like a 80 years old with anemia. “Are you alright mum?”, “Are you sure?”, “What about your bum?”.

Anyway, that day, I said to myself something that didn’t cross my mind since… since never actually: a bit of sport would do me good.

And once back in Paris, I took advantage of the fact that my children stayed with their grandparents to throw myself into a daily jogging routine.

Wanna read about it?

08h00: After investigating all available options for physical exercise and eliminating the gym (already tested twice), swimming pool (done too) and curling (my true passion, together with nail art, but it is difficult to practice in Paris), I find at the bottom of my wardrobe, well hidden, those lazy bitches of running shoes, which I bought on one of those days when full of hope you fall for a too small by two sizes pair of jeans AND the shoes that might enable you to fit in it after two years.

08h03: The Churros reminds me that it’s not a school day today so I am not late to take Rose to school, “no need to rush”, I can even go back to bed.

08h06: I tell the Churros that, strangely, he was not that worried for my sacrum last night when it was obviously much more loaded than during a jogging.

08h08: The Churros tells me that he gets excited thinking about last night.

08h10: I quiet him down directly, I will need all my energy. I don’t want to scare him but I read that athletes, after a while, are less interested in sex for they have such a blast during exercise (or maybe that’s Buddhist monks, I am not quite sure).

08h11: The Churros thinks it’s not nice to have a sporty wife. I tell him I’ll become a bombshell and he will surely like it. The Churros replies that he doesn’t care that I’m a bombshell if he can’t touch.

08h12: I am wondering if I should eat before or after running.

08h13: The Churros thinks it would be unreasonable to go with an empty stomach. He is smiling weirdly when saying this.

08h14: I call my friend Zaz to ask her if I should eat before or after running.

08h15: My friend Zaz doesn’t know, however she is worried for my knees, « jogging is very bad for joints ».

08h16: I call my friend Laetitia, she is in the cinema business, these people know.

08h17: « Fuck, we said we would never ever start jogging », this is what my friend Laetitia answers. For that eating before or after thing, she thinks it doesn’t matter.

08h19: My friend Chloé is extremely worried about me wanting to run, she proposes to take a day off so that we can talk together. She pronounces each word one after the other, articulating as if I suffered from cognitive issues.

08h20: My friend Julien is of the opinion that it’s better to eat before. On the other hand, he is categorical – he was in my team for the “beret” game – I must start slowly. Slowly meaning “twenty minutes max during the first week”. “Otherwise your body will give way”.

08h22: I’m starting to wonder if my close relations really want me to be a bombshell.

08h23: I’m tempted to call my friend Fanny who just finished a marathon in less than 4h, but I fear she will suggest I do it with her. I mean, my friend Fanny feels a bit low around the thirtieth kilometer. I still have in mind my friend Julien’s 20 minutes.

08h25: Now that the breakfast issue is sorted out, I am left with the place where to run. “Are you going to Bois de Vincennes [1]?” asks The Churros.

08h26: I reckon that Bois de Vincennes is too far for a 20 minutes run, I had in mind the little park outside our building rather.

08h27: The Churros thinks I will look like a hamster after two rounds.

08h28: I find The Churros has a tendency to minimize the area of the park. This habit of finding everything’s smaller than it really is, it’s typically French and where does it take us?

08h29: Anyway I’ve made my decision, for a first time I prefer to stay close to home. I know myself, I’ll give all I have and probably draw on my reserves. I’ll be too happy not to take the metro after one hour of sport.

08h47: I am hesitating on the first song of my playlist, I feel it will be decisive. Beyonce, Rihanna or a good old Dalida?

08h51: I call back all my friends and my mother to warn them that despite receiving no support at all from them, I am about to go for the first jogging of a long series. We’ll see who the fool is when I am a bombshell.

08h52: There’s no pocket in my legging to hold my Iphone.

08h53: I wonder if it wouldn’t be wiser to first buy proper equipment and energy gel like my friend Fanny used during her marathon. I am putting the cart before the horse a bit and we know it’s the best way to get in troubles. Sport is serious business.

08h54: The Churros just dug up an old waist pack to put my Iphone in. He says that anyway at this time of the day the park will be empty so I won’t meet anyone.

08h55: I just remembered that my friend Fanny told me that some people shit themselves during marathon.

08h56: I am not so sure anymore that being a bombshell is that important. After all Photoshop is there to be used.

08h59: I put my cigarettes away, close my waist pack, put my headphones on, check the time and let’s go Dalida, If I don’t do it for me, I do it for my kids.

09h01: five songs if you don’t count Dalida. What a chatterbox. Seriously, are these twelve chorus mandatory or what?

09h03: I have a stitch in my side. Learning the hard way. It might be that I am already a bombshell.

09h06: I wouldn’t want to get carried away but I think I’m getting hooked on sport. I mean, I feel that if I don’t do sport tomorrow. I’ll miss it.

09h07: I am getting caught in a fucking system maybe. My family life will suffer even though I chose to become free-lance to be more available. Just try to be available when you run marathons all over the world.

09h08: When I think that Julien believe I’m not able to run for more than 20 minutes. I haven’t checked the time but taking into account Dalida’s logorrhea I must be almost there.

09h09: Fanny never told me about the nine minutes wall.

09h09: Is this a joke and the tenth minute is jerking me around?

09h09: We are in a spatiotemporal drift, it’s the only possible explanation. It could be that I will run for the rest of my life, stuck at 9h09.

09h09: Is it possible in this case to finally experience the famous moment of pleasure all those who run talk about? That thing which give the impression they’re having a vaginal orgasm with each stride?

09h10: The more I think about it, the surer I get. And if I can trust someone, it must be Julien. He doesn’t joke with this kind of things.

09h10: Here we go, time stopped again. Apple product are shitty, I understand why kids swear only by Samsung.

09h10: Dalida’d better keep her mouth shut or I’ll make her eat her hair. I can’t stand her anymore. Neither her, nor Abba, nor Michel Delpech. Damn underground playlist.

09h10: Go on, have fun eleventh minute, in the meantime I am shaping up.

09h10: I am not categorical but I might just have felt something that could the famous pleasure. Welcome ladies endorphins, I’ve been waiting for you for 40 years, bitches, NO NEED TO RUSH RIGHT?

09h12: Fanny didn’t mention gas, but for sure I’m that close to shit myself.

09h14: I’m that close to a whole lot of nice stuff, that’s for sure, however I am not breathing anymore.

09h14: When Julien said « your body will give way », I didn’t get that it was meant literally.

09h14: There’s an old lady in front of me, she is running too. I don’t know yet the runners’ honor code, will she take it the wrong way if I overtake?

09h15: On the other hand granny’s in shape, of course she must be only starting her jogging – and she is not a victim of a spatiotemporal plot (or she has a Samsung Galaxy) – but I’m struggling to catch up.

09h15: That’s why I will keep running, having this much energy at that age is priceless.

09h15: Come on, another small stride and I overtake, it’s a spirits lifter. When I think it is said that jogging is a lonely sport. Whereas not at all. Bonds are created, quiet maybe, but I think that’s it, I just joined the runners brotherhood, it could make me cry. This or the lack of oxygen.

09h15: Oh but, it’s an equipment from the playground

09h16: It’s an equipment from the playground which is thus immobile.

09h16: And which I’ve tried to overtake for the past three minutes (18 for those who have a Samsung)

09h17: Which means I am actually standing still.

09h18: I get an abominable coughing fit.

09h19: Hey Dalida, if you think that I give a damn that you’ve put gold in your hair to openly go fuck a teenager, let me tell you you’re barking up the wrong tree.

09h20: I just saw my reflection on the entrance door and I’m anything but a bombshell. Or maybe it’s because of the waist pack.

09h23: For now I’m not sure I’ll miss it, the idea of not running again tomorrow.

Edit: The legs in the pix could have been mine if I hadn’t dropped my marathon runner career after one week. These are Zaz’s, that tart who NEVER runs (or once a year).

Edit2: Fanny, since this experience, I have no word to describe the admiration aroused in me by your 3h45 on Paris marathon.

[1] TN: Bois de Vincennes is a famous park and wood next to Paris where lot of people go jogging

[2] TN: Mourir sur Scene is one of the most famous song from Dalida, it means dying on stage.